Sony is entering the virtual reality market with the PlayStation VR headset, but will customers purchase it?  Can the maker of Walkman re-emerge as the consumer electronics star after Apple stole the mantle with their iPod, iPhone, and iPad series?  Three strategy paradigms indicate it just may be so. 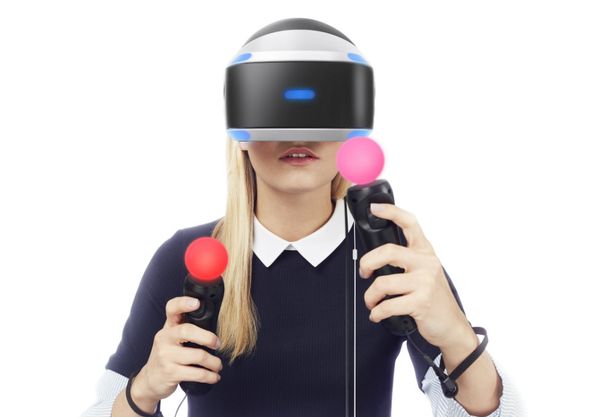 This is the opposite of “build it and they will come,” which was just a field of dreams. In its place, we have “to make them come, build what they want at a price they will pay.”

Sony took this value-engineered approach, or at least appears to have tried to, with their PlayStation VR launch.

First, they defined their target customer as a gamer.  This is a different market segment than those looking to use virtual reality for professional purposes such as showcasing condominiums remotely, designing industrial engineered products, or training professionals and military personnel.

The gamer VR customer may be willing to forgo some of the higher-end VR chips and features that are required by these other segments in order to have a lower, more family-budget friendly, price point.  On the other hand, gamers may demand more in terms of comfort and abuse-tolerance than VR headsets used in more controlled environments.

According to Masayasu Ito, Sony Interactive EVP, they took exactly that approach.  In designing the PlayStation VR.  He states: “the user experience must come first before the technical specs.” As such, the PlayStation VR design team made what appears to be rational tradeoffs.

The result is a PlayStation VR headset priced at $399 entering a market against Facebook’s $599 Oculus Rift and HTC $799 Vive, both of which require a $1,000 or more high-end computer to run, and tend to be used for professional purposes. Research firm IHS estimates that with the PlayStation VR launch, the virtual reality hardware market will be $1.6 billion this year.

Not that I can or am stating that everything Sony did was perfect.  And I am definitely not stating that everyone will find Sony’s design tradeoffs to result in a good offering. But they did define their target market and product design requirements in such a manner broadly appearing to be compatible with a highly successful product, launch. Value-engineering works.  Sony appears to have done this with their PlayStation VR.

D’Aveni’s Hypercompetition in Timing and Know-how

In 1994, Richard D’Aveni released Hypercompetition, a groundbreaking book describing competitive strategy in a hyper-competitive world.  The second of four competitive arenas he describes is that of timing and know-how.

In the timing and know-how arena, firms compete by creating entirely new industries through utilizing the firm’s unique tangible assets and intangible knowledge and capturing early, if not first-mover advantages.

While Apple can be used as a modern example of competing through timing and know-how, D’Aveni actually used Sony as his example back before the iPod, iPhone, iPad series of consumer electronic breakthroughs.

In the early 70’s, Sony launched the all solid-state Trinitron TV, earning Sony an Emmy Award in ‘73 and redefining the standard of viewing excellence.  As competition heated up, Sony launched Betamax, which briefly led the market until network externalities drove the VCR format to dominate a now defunct industry.  As the prospects for the Betamax began to fade, Sony again applied its deep knowledge of consumer electronics to release the Walkman in the early 80’s. 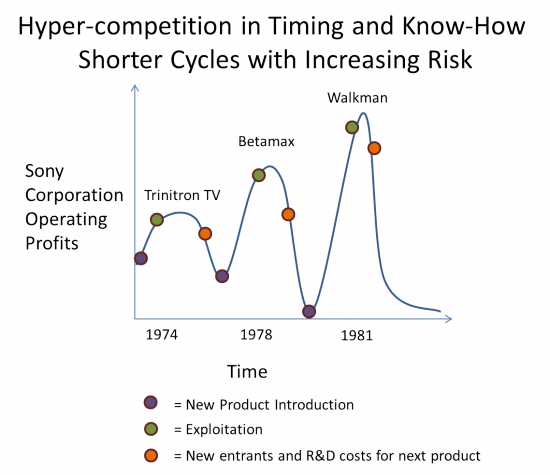 Today, it can be said that Sony is once again leveraging its deep knowledge of gaming and consumer electronics, built upon its PlayStation knowledge.  It also appears to be appropriately timed in relationship to the development of the core components required for moderately priced virtual reality hardware.

While I am definitely not stating that Sony is assured success by being an early mover in the gamer VR market, and D’Aveni and myself are both well aware that not all first-movers hold an advantage in a rapidly evolving industry, I am stating it fits the pattern of what looks likely to be a successful new business venture.

Competing with timing and know-how works.  Sony appears to have done this with their PlayStation VR.

Network effects, first popularized by Metcalfe in the 80’s, business ecosystems, and platforms have become the rage of Silicon Valley.  According to this vein of thinking, businesses come to dominate markets as consumers and suppliers both utilize a platform to transact and create value.  In these markets, value is created in proportion to the square of the users of the network, not linearly as they are with simpler transactional products like baked goods or televisions.

The Sony PlayStatoin VR headset plugs into their PlayStation 4 videogame consoles.  Estimates state that there are 43 million PlayStation 4 consoles in the market today, and that this number will rise to above 50 million in 2017.

This is in contrast with the VR headsets made by Facebook and HTC.  Both of these headsets require high-end computers as mentioned earlier.  Fewer consumers own the necessary platforms for these competing VR headsets, as such they enter a weaker ecosystem.

In comparison, the PlayStation VR is entering a healthier ecosystem than either of its existing competitors.

Other firms, notably Google, are also working on VR gaming solutions.  Some of these VR gaming headsets require no more than a mobile phone to operate.  This might prove to be an even greater platform for gaming, but that story is for a later day and it is hard to forecast how these will be received.

As stated, first-mover advantage is disputable.  Markets evolve.  Today, I cannot state whether the VR + Gaming Console platform will out- or under-perform a VR + Mobile Handset platform in 2020.  But today, in 2016, it looks like it will.

Part of the platform theory stresses the value of suppliers as well as customers.  For VR gaming, that is an issue of having games customers which other gaming firms are willing to build.  Again, we see in Sony’s PlayStation VR release a target to have at least 50 games ready at launch, including STAR WARS ™ Battlefront ™, Batman Arkahm, RIGS Mechanized Combat League, and Farpoint VR.  I am sure Sony is hoping other game developers will hop on the platform soon.

Success, Likely But Not Assured

There are other business strategy paradigms we could explore with relation to this product launch.  Yet business success requires more than following strategic paradigms like a recipe.  It also requires some luck.  As a gamble, Sony’s PlayStation VR looks like a good bet, but nothing is ever assured.