Value on the Table vs. Capturable Value

This seems like is an obvious and straightforward question:

MIT, Harvard, Chicago Booth, DePaul, McKinsey, and Wiglaf Pricing tout economic Value to Customer among many others as an academically sound and best-practice tool for guiding pricing decisions. But for it to be a useful tool for pricing, one must be able to convert the results of an EVC study to an actual pricing decision.

And there is the rub. It turns out, there isn’t any singular standard rule for making a pricing recommendation based on the EVC.  Instead, we have many.

In this article I will review some of the issues engaged and practices suggested by different authors, and then offer the Half-Gains Double-Losses rule to define the capturable value from the economic value to customer and therefore drive a price recommendation for guiding the pricing decision.

Economic Value to Customer versus Price

Economic Value to Customer identifies the price at which a customer should be indifferent between the offer and a competing offer. It is best calculated as the price of the nearest competing alternative adjusted for the differential benefits of the offering, for a given customer segment. In examining the differential benefits, one should include both positive and negative benefit differentials to construct a true view of the economics of the offering from the customer’s viewpoint.

With a solid model of the economic value to the customer, managers are able to understand the value created for customers with a new offering. This can be understood as the value on the table.

Yet the value on the table is almost never the price.

With a new offering, the firm rarely attempts to capture all of the value it creates for customers.  If it did, it would find customers are economically indifferent between the new offering and its competitors’.  Given an economically indifferent tradeoff between the firm’s untested new offer and a known and proven competitor’s offer, most customers choose the known over the unknown. Thus, pricing at the full economic value to customer will fail to capture much interest or market share upon launch.

Given this reality, firms are typically advised to price below the economic value to customer—but how much lower? John L. Forbis and Nitin T. Mehta of McKinsey writes: “… you want to cede only enough value to customers to make them switch to your product, but not more.”  While this is unobjectionable, it is also obstructive in defining a generalized framework for execution.

Capturable value defines the portion of the value on the table that the firm can capture through price.

Differential capturable value, as it is defined herein for offerings with net positive differential value, is the difference between the economic value to the customer and the price of the nearest competing offer.

(We exclude the issue of new offerings with less economic value to the customer than its competing alternative, that is, offerings with net negative differential value, as it would greatly complicate this article. It too can be considered, but these cases will be tabled for now.)

The difference between the differential capturable value and the value on the table can be large or small. But when is it small and when is it large?  Given the economic value to the customer, what determines the price?

This concept has been iterated in many teaching notes across many universities.  But is there an accepted and generalized method for estimating bargaining power much less its impact on the ability to capture the value on the table? No.

In light of this, many teaching notes suggest starting with a “fair deal” defined as an equal sharing of the value of the differential benefits between the firm and the customer. 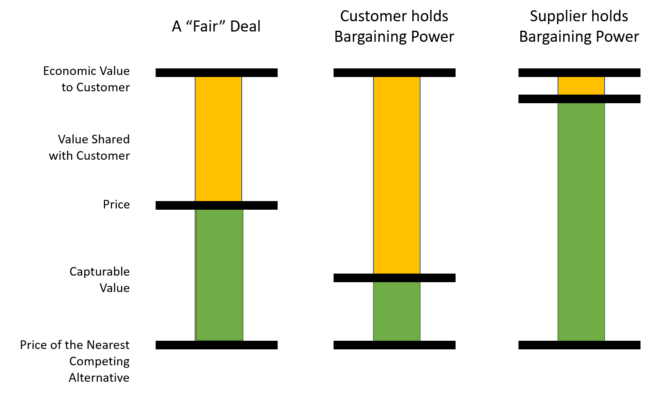 I have heard of a 50/30/15% rule that is sometimes attributed to McKinsey, yet can find no evidence that they actually have such a rule.  According to this 50/30/15% rule, a firm should have a starting price such that it shares 50% of the value with the customer. This would be the Fair Deal depicted above.  From this starting price, the firm should expect to capture 30% of the net positive differential value and should walk away from the deal when bargaining drives the price down to only 15% of the net positive differential value.

In support of the 50/30/15 rule, I spoke with a purchasing agent at a large utility.  According to him, he expects to pay only 15% of the net positive differential value to a vendor when purchasing technology.  It’s a data point but hardly conclusive.

Unfortunately, the 50/30/15% rule is written in the context of offerings that are subject to price negotiation, and usually have only one major point of positive differential benefits.  Many new-to-the-world offerings will have no price negotiation and will have multiple points of differentiation, some positive and others negative.  When there is no negotiation, the price offered would be that which customers can accept or reject. Hence, while it is an interesting approach, it isn’t sufficient for driving pricing decisions given the Economic Value to Customer in most situations. 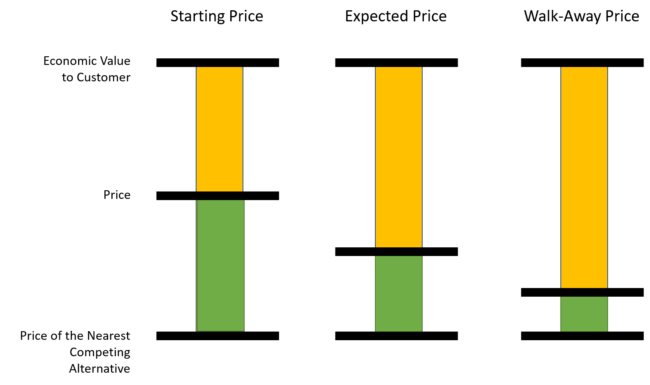 In the Ultimatum Game, a set amount of money is to be split between two people but only if they both agree.  One person, the Proposer, is asked how much of the money will be offered to the other. The other person, the Responder, is asked to either accept the offer split of the Proposer or reject it, and if the Responder rejects it, neither side gets any of the money.

Behavior economics has repeatedly shown that humans are more averse to losses than they are to seeking gains. Kahneman & Tversky research indicated that people give those losses twice the weight that they feel an equal gain in their decision-making.

For example, if someone took $5 away from you, you will feel discomfort and encode that discomfort at as a loss greater than money taken.  Given the observed weighting function, it is likely that the $5 loss will be encoded as a near $10 loss in your decision weighting.

Research and arguments such as this have led me to adjust negative differential benefits to account for the perceived impact of losses by doubling their value.

This leads to a rule which I offer for recommending the differential capturable value from an EVC: Half Gain and Double Losses up to the Price of the Competition Alternative.

Under Half-Gains and Double-Losses, one assumes that they can capture half the value of any positive differential benefit (fairness effect revealed from the ultimatum game) while doubling the impact of negative differential benefits, such that the capturable value decreases by 2 for every 1 loss (loss aversion revealed in prospect theory).  As for competing alternatives, one assumes they can capture 100% of the value thereof for these are directly displaced.

Conceptually, one could depict and calculate the EVC as such: 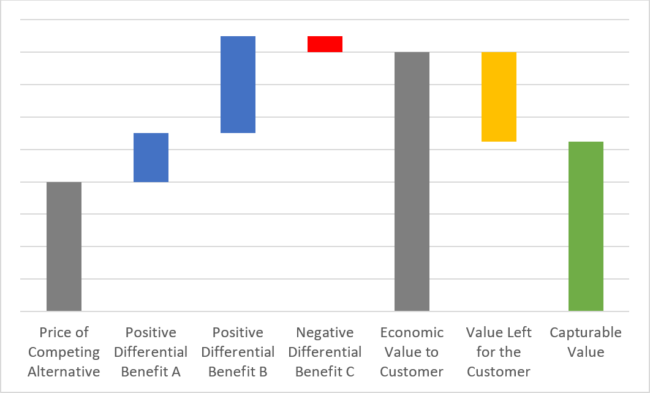 As the Half-Gains and Double-Losses rule includes the recent findings of behavioral economics, it is an improvement over the simple 50/30/15% Rule. Moreover, an application of the 50/30/15% Rule would encourage managers to expect customers to pay only 30% of the positive benefits while also only deduct 30% of the negative differential benefit.  (That is, instead of deducting 2X10, one would deduct only 0.3X10 or 3 in the above example).  This would directly contradict known behavioral economics.

The Half-Gains and Double-Losses rule will lead to a starting price that is less than or equal to that given by the 50/30/15% Rule, yet should yield a more accurate estimation of the willingness to pay of customers.

Another approach has been to separate the hard from the soft impacts. For instance, if a given benefit will remove the need to purchase something or reduce labor by a full headcount, one would count this as a hard impact.  However, if a benefit is to simply “improve productivity” but not fully remove the need to purchase an item or a full headcount, one would call this a soft impact.

For hard impacts, one can capture the full value of the benefit.  For soft, one can only capture half.

This concept was first revealed to me by a business analysist working on the purchasing decision of a software package.

There are many other behavioral and psychological issues that may impact the price in comparison to that indicated by either of the rules above. Risk aversion, end-benefit effects, shared-cost effects, mental accounting, uncertainty effect, newness effect, expenditure effect, and many others will also impact the capturable value.

Outside of customer behavior, we also have corporate strategy and competitive dynamics to consider.  Winner-take-all markets, customer lock-in, and pre-empting a competitive response are all issues that may decrease or increase the starting price of the offer.

The Half-Gains Double-Losses rule is not perfect.  It misses many issues.  But, it is an improvement over the simple 50/30/15% rule in that it includes the known behavioral impacts of negative differential benefits.  The 50/30/15% rule lacks this specificity in examining from the origin of the overall positive benefit differential. Moreover, the Half-Gains Double-Losses rule is operationally effective, which is a large improvement over simply guessing at Bargaining Power and its impact.

Economic Value to Customer will define the value on the table and we can only estimate the market’s willingness to pay, and therefore the capturable value, until the offering is launched. We offer the Half-Gains Double-Losses rule as an improvement over other methodologies that either ignore the question, or acknowledge the question but give up because it is complicated. Or conversely gloss over the details that define where the value arises, and any dependencies on customer behavior.  The Half-Gains Double-Losses rule is both operational (one can do this methodically) and theoretically sound (accommodates known behavioral impacts of the expectation of fairness and customer’s loss aversion).

Yet the most important question is: does it work?  It successfully estimates the realistic capturable value given the economic value to customer, and therefore yields a realistic starting point for pricing a new-to- the-world product. Yet, like with every other pricing methodology, be it conjoint or elasticity studies, it is only an estimate.

In the end, executives from sales, marketing, and finance should come to an agreement regarding the economic value on the table as well as their differential capturable value on a line-by-line basis. They can then choose a price they are willing to accept and defend. Only when the offering hits the market will customers demonstrate the capturable value by their purchasing decisions.