Having a long list of prospective buyers may be comforting for a salesperson, but a highly applied sales methodology for business markets suggests salespeople should only pursue prospects that fall within two out of four response modes.  What are these response modes?  How do they affect price performance?  And why should salespeople only pursue two of them?

The four response modes can be defined as Trouble Mode, Growth Mode, Even Keel, and Oblivious.

Growth Mode refers to a prospect who acknowledges that her state could be improved, and that the improvement would require the purchase of a product or service.  The acknowledgment of an opportunity to improve their state implies that, in their mind, they are performing below potential capability and that to reach their potential, they must take action.  Like prospects in Trouble Mode, prospects in Growth Mode are actively engaged in a purchase decision.

Even Keel refers to prospects who are satisfied with their current state, at least satisfied as it relates to the product or service being sold by the salesperson.  It may not be that their current state is good, nor that it can’t be improved, but simply that improving on the current state in the area affected by that salesperson’s offerings isn’t a priority currently.  These prospects are unengaged in the market currently, and are therefore unlikely to currently purchase.  The emphasis is on “currently”.  They may not purchase today, but at some point in the future they are likely to re-engage the market.  For a salesperson, these Even Keel prospects should not be a high priority.  Even Keel prospects are best managed by marketing communications until their response mode changes. 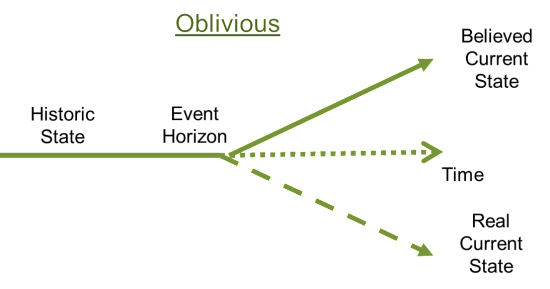 Of these four response modes, only prospects in Trouble or Growth Mode are likely to purchase.  Even Keel or Oblivious prospects are not in the market, at least not today.  But what does this have to do with pricing?

Consider a salesperson with the unfortunate situation of having many prospects in Even Keel or Oblivious mode.  These salespeople are evaluated based on their ability to close sales, but their prospect pool is not in the market.  How might they pull those prospects into the market?  A common response is to offer them a discount to stimulate demand.  Result:  price performance weakens.

This is a horrible result, one not desired by sales nor pricing leaders.  So what is the alternative?

Consider Trouble or Growth Mode prospects.  They are actively engaged in the market.  These are the customers that acknowledge the opportunity for improvement and who are willing to pay to capture that opportunity.  As such, they don’t need a discount to stimulate their demand.  They may still demand a discount, but that discount request comes from a prospect that has compared the alternatives, made judgments regarding their relative value, and is currently engaged in bargaining behavior.  Discounts granted to prospects bargaining need not be deep to close the deal, only deep enough to meet the customer at the point which leaves them better off in light of the alternatives.

As for our unfortunate salesperson with a prospect pool filled by Even Keel and Oblivious, they should be directed to improve their prospect pool by identifying and pursuing Trouble and Growth Mode prospects rather than try to close sales with customers that lack a willingness to pay.

They may miss quota this month, but making a bad pool good costs too much.  Instead, build a better pool.