In Freshman Land, economic price optimization can be done with simple models and equations.  But Freshman Land doesn’t reflect reality, and hence we have to move to the next level.

In two prior articles, we examined standard models for price optimization taught in freshman economics.  In both cases, these models yielded some fruit, but proved questionable when it came to actually identifying prices.  One major fault with both of these models derives from a common shortcoming, and this shortcoming can be overcome.

Simplistic Models:  Insightful but Not Necessarily for Pricing

In Price Optimization with Globally Linear Demand — Both Useful and Useless, we demonstrated that modern thinking on corporate strategy can largely be derived from basic economics.  Specifically, we reached the conclusion that all competitive advantage derives from exploiting a rare and inimitable resource that enables a firm to deliver greater value at a lower cost to its customers.  This is a significant accomplishment and should not be overlooked.

However, this conclusion is not what most executives think about when they think of economic price optimization.  Instead, they think of it as a concrete and self-sufficient method for pricing.  And we have seen that this simplistic approach is useless when it comes to actually pricing a product or service.

In Economic Price Optimization with Locally Measured Elasticity of Demand — Unreliable, we demonstrated that a firm’s pricing power is a function of the elasticity of the market it serves.  More specifically, firms serving relatively inelastic markets—markets where customers are relatively price insensitive—are able to raise prices and improve profits, while firms serving relatively elastic markets—markets where customers exhibit high price sensitivity— are unable to raise prices and may need to lower prices to increase sales volumes.  For this reason, firms seeking pricing power should seek to reduce their customers’ price sensitivity, and this usually implies the firm should seek to increase its customers’ sensitivity to differences in benefits.  Again, this is a significant accomplishment and should guide strategy decisions.

But that broken ground should be taken with a grain of salt, as we also showed that direct measurements of elasticity are bounded by uncertainty, and therefore the optimal prices derived from this method are most appropriately described as a range rather than a precise number.  Since this range can be very broad, the usefulness of this approach is unreliable.

A common shortcoming shared by both of these derivations is in their model of demand.  Economic price optimization relies upon an accurate depiction of the market demand function.  Neither of the above approaches uses a demand curve that is observed in actual markets.   They may approximate demand curves for small changes in price, but they do not describe the real, observed demand curves.

Real markets don’t generally face a linear demand function, like that shown below.  While a downward sloping straight line represents the fact that demand normally increases as price decreases, and simple straight lines are easy to work with in deriving proofs and demonstrating concepts, they don’t capture the full beauty and complexity of market behavior. 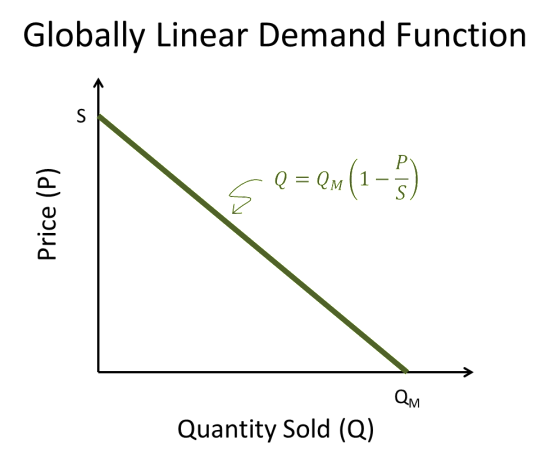 Similarly, markets don’t generally face a power-law demand function, with curves like that shown below.  The assumption that elasticity is part-wise constant may be true for small changes in price and quantity sold, but this assumption doesn’t describe the observed demand at all prices for any market known to me, and probably not any market at all.  Elasticity is useful for describing the market’s reaction to a small price change, and therefore managerially useful for evaluating the potential for a small price change.  Yet while this model is useful for small price changes, it isn’t the best approach for describing the market’s reaction to all possible prices.  In fact, it is generally the wrong mental model to use when trying to describe the full range of prices possible. 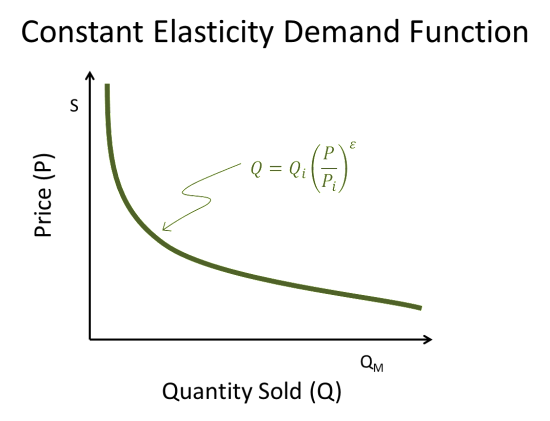 We need a better model of demand.  Fortunately, we have one or two.  But first, let’s think about how real markets react to real prices offered by firms.

Please note:  I am examining firm-level decisions in competitive markets, not “the whole market”-level issues.  I am doing so because I wish to address the challenges faced by real executives that manage real businesses, not economists or governmental agencies describing and regulating entire industries.  As a point of clarification for classically trained economists:  you may wish to think of this as the decisions of a firm engaged in monopolistic competition moving to the extreme of perfect competition.  This does describe most real firms in real competitive markets under free-market capitalism as it is practiced today.

For a firm serving customers in a market with competitors, there is a price so high that it can expect all of its customers to abandon it and choose to purchase from a competitor.  Let this be defined as Pmax.  At any price above Pmax, the firm’s demand drops to zero.  At a price below Pmax, at least one customer will purchase something.

For a firm serving customers in a market with competitors, there is a price so low that it can expect all customers to purchase from it, with all competitors losing their business.  Let this be defined as Pmin.  At any price below Pmin, the firm’s demand increases to reach the full demand of the entire industry.

Since the firm makes no profits at Pmin, and is likely to achieve losses at Pmin, no rational firm should choose to price at Pmin.

The Range in the Middle 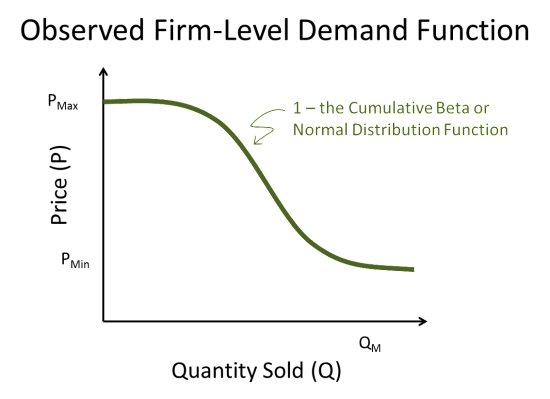 Now, given this demand function, where should a firm set prices?

Economic price optimization can be done with this model for demand and produce reasonably useful results after making appropriate measurements of various parameters required for defining the demand function.  The math behind such an approach is the same as that described in our prior two articles, but the equations get rather long and intractable with pencil and paper.  As such, it is common to program a spreadsheet or software system to identify the optimal price for a given product and market.

Still, I cannot suggest this method as the best starting place for every pricing decision.  For most pricing problems, there are more efficient and accurate approaches that start not with an abstract model of market demand but rather with concrete data gathered from customers and prospects regarding their perceptions of differential benefits and willingness to pay.  For others, we find we want precision around a point rather than precision for the market overall.  Which implies, that while this model of demand is superior to the linear or constant elasticity model, it still isn’t perfect.

If the above demand curve can be used for subset of pricing problems only, what does it reveal to the rest of us?

If a product has to have one list price for the market, where should it be on the Observed Firm-Level Demand Function?  High.

Consider that most firms practice discounting.  Discounting is a good method for exploring demand at prices below list.  As a rule, a well-managed discounting policy enables to the firm to capture marginal sales at marginally lower but still profitable prices.  Since discounts are made from higher list prices, and since discounting can enable the firm to price an offer selectively for certain customers,  we come to the conclusion that list prices should be set high on the demand curve while discounting policy is used to explore lower price points on the demand curve.

If someone claims their market is being commoditized, examine the range of prices in the market before you accept their claim.

In a fully commoditized market, the difference between Pmax and Pmin is zero.  Using economic speak, one would say “Under perfect competition, all firms are price takers.  The industry-clearing price is the one price all firms must accept to be in the market.”  (No wonder freshmen have a hard time understanding economic textbooks.)

Not that there are hard rules about this, but one can pretty safely state the following:

Some markets, like oil, wood, chemicals, gasses, and vitamins, are best described as commodity markets.  In these markets, the difference between Pmax and Pmin is very small if not effectively zero.

Most markets however have a wide range of prices and products within the category.  Just consider the price difference between Relic and Philippe Patek watches, Kia and Mercedes cars, or Nokia and Apple smartphones.  Differentiated offering markets can see price ranges with a difference greater than 1,000 times between the lowest- and highest-priced product within a category.  These price differences directly reflect the non-commodity nature of these markets.  And if the highest-priced transaction in the market is only 50% higher than the lowest-priced transaction in the market, I still would have a hard time rallying behind calling that a commoditized market.  There is still room for price differentiation.  Just look at Vulcan Materials – even they can charge different prices to different customers for something as common as dirt and rocks.

Many people like the idea of using economic price optimization to set prices, but it isn’t as simple as identifying a number and plugging it into the model.  That is the wrong mental model.

The key to pricing lies in understanding market demand, understanding what customers want and what they will pay for it, understanding that no two customers are alike and that each may have a different willingness to pay.  And for that, there are many methods and no one approach solves all pricing problems.  Not data analysis, not surveys, not interviews, but all of them and each for their own pricing challenge.