Airline manufacturing analysts predict a demand of approximately 34,000 new commercial aircraft over the next 20 years.  The most fruitful subset (68%) of the entire commercial fleet market rests in the 100 to 149 seat capacity segment.  With Bombardier inching at the heels of the big two and commercial airlines demanding more efficient airplanes, how will the market landscape adjust and distribute the market share up for grabs? 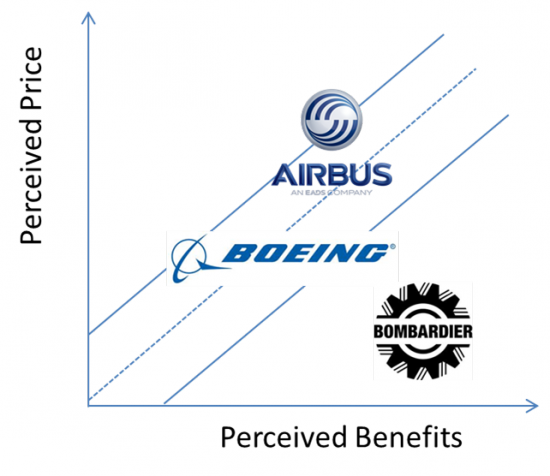 With over 382 commitments for CSeries aircraft from customers including Korean Air, Luxair, and airBaltic, Bombardier proves it is serious about delivering cost-effective airplanes to consumers seeking better margins.  Rick Erickson, an independent aviation analyst, speaks of the Bombardier CSeries, “Once it’s up in the air and they start proving the plane’s cost-benefit — they’re arguing, 20% fuel savings — I think we’re going to see airlines fairly quickly start moving towards the aircraft.”  The resilience of the air transportation market even in economic downturns, estimated 5% annual growth in world passenger air travel for the next 20 years, and passenger airlines seeking operating cost cuts, yields promising futures for airline manufacturers.

The pertinent question at hand is this: how will the dominant market powers, Boeing and Airbus, respond to a fringe firm encroaching on their market share and revenue?  Will the larger relative market cap companies, Boeing and Airbus, choose “predatory” tactics to combat such advances by Bombardier?  And by what means will Boeing and Airbus approach this market invasion?  Several countering techniques could be employed to mitigate market share loss including price concessions to meet the competition, volume and customer loyalty discounts, or other promotional incentives.  The incumbents need to decide which method will allow for acceptable market share loss with respect to reasonable margin deterioration.  Figure 2 shows the decision events and outcomes associated with employing a price-to-meet-competition strategy.

Figure 2 explores a possible distribution of revenue over the next 20 years between one dominant player, Airbus, and the entrant, Bombardier (accounting for Boeing’s revenue).  It is estimated that $2 trillion worth of value exists in the 100 – 149 seat, single-aisle passenger plane market from 2012 – 2031.  The subsequent statistics are founded on plausible expectations of Bombardier’s market growth strategy.  Assuming that Bombardier effectively executes its 50% market-revenue capture, the following conjectures will rest.

Presumably, if Bombardier were to stay out of the market, Airbus and Boeing would split the revenue spoils and receive approximately $1 trillion each.  If Bombardier enters the market as expected and supplies abundant CSeries airplanes, Airbus has options to maintain its current price level or offer price discounts to meet competition.

If Airbus does not change its pricing strategy for the current A320 aircraft:

If Airbus grants price concessions to be more competitive or rectifies its price-to-value alignment:

Employing a price-to-meet-competition strategy, Airbus would more than likely experience some revenue bleed-out, but would avoid losing half its revenue to Bombardier.  Bombardier’s market-growth rate would be partially thwarted by such discounting tactics employed by Airbus.

The outcome of this market entry scenario can be derived through backward induction.  Airbus would choose to cut its price if faced with entry from Bombardier to salvage potentially drastic revenue loss.  Bombardier evaluating its potential revenue gain would choose to enter the market due to $1trillion (Enter) exceeding $0 (Stay out).  The outcome of the game delivered is a (Enter, Cut Price) outcome.  Of course this analysis is purely speculative, but has grounds based on best-observed pricing practices.  More robust studies would explore multiple decision trees encompassing both incumbents and the entrant, account for probabilistic choice, and move-order significance.

Other means of observing market interaction in the aviation manufacturing market would prove useful in providing further insights on expected incumbents’ actions.  Needless to say, Airbus and Boeing’s key line of revenue and primary source of growth going forward is at stake.  Without strategic pricing direction and market execution by the dominant firms, the current duopolistic market may be a thing of the past.