C. Larry Pope, CEO of Smithfield Foods, Inc. has frankly told the market to expect rising pork prices to keep rising.  We have seen protein producers fail in price management before, so should we believe him?  This time, I believe they got the message.

(This article comes with an associated spreadsheet that can be found here.)

It is no secret that food prices are increasing, and it also isn’t a secret that George W. Bush caused the increase.

Back when George W. Bush was president, he made a bad decision (popular perhaps, but bad nonetheless) to increase the use of corn based ethanol in the production of auto fuels.  The decision was made on the grounds that it would provide a green source of energy and reduce our dependency on foreign oil.  However, the Environmental Protection Agency (EPA) itself states that ethanol production has a negative, to at best neutral impact on environment.  Moreover, many scientists have calculated that the total energy consumption required to make corn based ethanol, (from growing corn to delivering the fuel) is roughly equal to the energy delivered in burning ethanol in an automotive internal combustion engines.  Hence, ethanol as fuel is neither green nor effective in reducing our nation’s oil dependence.

We are currently stuck with this bad political decision.  Given that Barak Obama was elected president partly on the grounds that he would be a more green-oriented president, and given that people mistakenly believe ethanol is a clean green fuel despite the science, I don’t have high expectations of seeing this bad political decision being reversed in our immediate future.

The result of this bad decision is that currently 40% of our corn crop is being used in the production of automotive ethanol.

Economically, the story is clear.  Bush’s policy of using ethanol for driving delivered a shock to our nation’s demand for corn.  Demand shifted upwards dramatically following his edict. Meanwhile, the arable land for growing corn is somewhat constrained.  As demand shifted upwards against a constrained supply curve, prices slid up the supply curve to a higher point.  See Microeconomics of Corn. 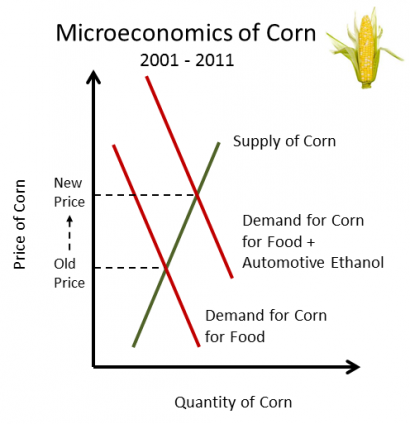 For modern protein production in the US, corn is the required input.  Pigs eat corn, and people tend to eat pigs.  So, in the chain of things, if corn prices go up, pig production costs increase, which means that pork at the grocery store gets more expensive.  As a result, it costs people more to eat pork and other animal based proteins (catfish and tilapia included if you’re a pescatarian.)

In an interview with the Wall Street Journal, Mr. Pope noted that 60% to 70% cost of raising a hog is tied up in grains.

The base price of corn has roughly doubled.  On the spot market, corn prices have gone from $2.40 a bushel to $7.40 in just a few years, but most animal protein manufactures have been able to hedge their corn purchases to deliver a lower average purchase price than that seen at the top of the corn market.

Did Pope get it Right?

Mr. Pope appears to be well aware of the economic foretelling for his industry. See the exhibit below for an analysis or download the 2011-05-Smithfied1.xls spreadsheet.

Thus, we see that Pope’s reduction in pork production has delivered the anticipated price increases, and that the size of the price increase at the grocery aisle is somewhat similar to that expected from microeconomics.

But was this enough?  Does economics indicate more was necessary?  While from an analytic economic perspective we might have expected a 40% to 60% reduction in pork production based on the cost increase of corn alone, there are good reasons to temper the economically predicted requirements.

Thus, the reported decrease in pork production and observed price increase at the grocery aisle are within expectations.  Mr. Pope may have to reduce pork production further if the price of corn doesn’t fall, but for now it appears he is leading his company safely through the storm.  (The same could not have been said of Lonnie “Bo” Pilgrim.) 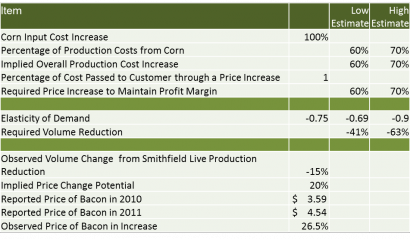 Any CEO that deliberately cuts production and raises prices knows that a key metric to his success, and therefore his longevity as CEO, is whether this comes at a heavy cost of market share.  To stem the potential share loss, Mr. Pope is righteously talking about why the industry needs to cut production and raise prices with the Wall Street Journal.

In a Weekend Interview with The Wall Street Journal, prices and production were the key focus.  Mr. Pope made clear the cause of the needed price increase, the steps he has taken to enable a price increase.  While this was done with the explicit purpose of explaining price changes to consumers and clarifying corporate strategy to investors, implicitly it also provided a strong pricing signal to competitors such as Tyson Foods.

Indirect price signaling is generally legally acceptable.  (Note, Mary Kissel reported that while the interview was taking place, a lawyer by training was sitting nearby to kick his leg if he spoke out of turn.)

Tyson Foods is no stranger to the challenges of corn prices and protein production.  They went through a similar storm a few years ago against Pilgrim’s Pride.  In that case, Pilgrim’s Pride was humiliated with bankruptcy only resolved through a buyout from the Brazilian JBS.  That episode was well discussed here in the Wiglaf Journal, and I am only hoping that the CEO’s in this storm have read the case studies of what happens from foolishness. 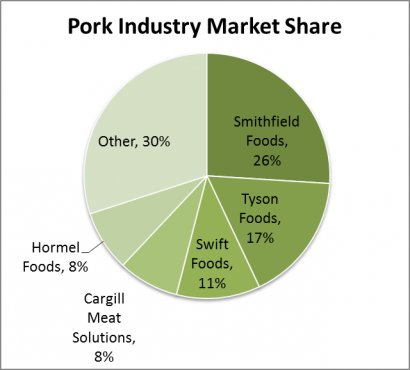 From analyzing this situation, it appears that Mr. Pope is properly managing his production and pricing, unlike his predecessor in another industry.  It also appears that he is properly communicating to the market, and therefore indirectly to his competitors.  If his competitors have learned from a similar tumultuous situation, we should expect them to follow appropriately.  The result is a choppy but hopeful outcome.

I say choppy, because the purpose of a business is to serve customer needs profitability.  No decent CEO likes stating that they aren’t going to serve as many needs by reducing production and raising prices.  But likewise no decent CEO would lead his company to the abyss of serving those needs unprofitably.  Managing these instincts is never easy.  Yet Mr. Pope appears to be doing so properly.

Note: At the time of writing, the author is not currently a direct consultant to nor investor in any of the firms listed in this article.