Macroeconomics and Entrepreneurship in 2005

Financially, entrepreneurship is a risky behavior. Dr. Schrager of The University of Chicago is often quoted for stating that 9 out of 10 new companies fail to survive. To put this in context, a casino gambler is more likely to succeed than an entrepreneur on a given day. Despite the poor odds of success for the entrepreneur, those who do succeed are likely to receive extremely high payouts. That is, they expect to earn a proportionately greater return than that which they could have earned through traditional employment such that the dismal odd of success are countered by the value of success when achieved.

External factors will shape these expectations. When external factors indicate the likelihood of success through entrepreneurship or the unlikelihood of success through traditional employment, an individual will be more likely to select entrepreneurship. Indicators of each of these factors can be found in macroeconomic statistics.

Because individuals will have an increased tendency to expect success when the economy is growing rather than shrinking, we can expect there to exist a positive correlation between the state level GSP and the state level of entrepreneurship.

As a measurement of the level of entrepreneurship within a state, we solicited from The Secretary of State offices the number of new businesses filings within their state.

We requested for a count of both corporations and LLCs. LLCs are relatively new types of business filings. In prior decades, new businesses would file as a corporation. In the 90’s, most states changed their state law to enable the establishment of LLCs. LLCs typically provide for similar legal protection and pass through taxation as corporations, but require less paperwork and lower filing fees. The key distinction between LLCs and corporations is between the allowable number of owners. Typically, companies with more than 75 shareholders are required to file as corporations. Because most small businesses do not have a large number of owners, LLCs have become highly acceptable entities for many entrepreneurs. This is reflected in the high percentage of new LLCs as a portion of all new businesses in various states. See Exhibit 1.

As a note of areas for errors, the number of new business filings is not a completely accurate measurement of entrepreneurship, but it is better than all others that can be gained with the same level of ease. (See Footnote 1.)

The above discussion provides us with the framework for analytically modeling entrepreneurship. Entrepreneurship, as measured by the number of new business filings from the Secretary of State can be examined in comparison to state level GSP and Unemployment.

We have tracked entrepreneurship of the State of Illinois over the 1999 to 2004 time frame. See Exhibit 2. 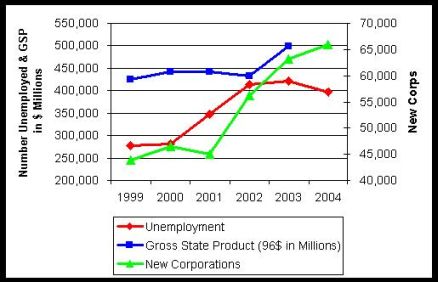 A regression analysis of the number of new business filings against the GSP and the number of unemployed individuals reveals the strength of these effects. According to our regression analysis, every $10 million increase in GSP is associated with the establishment of one new business. Furthermore, for every 100 individuals that join the ranks of the unemployed, 7 individual will establish a new business. Combined, changes in GSP and unemployment account for 88% of all new business creation over this period. (See Footnote 2.)

While most of the level of entrepreneurship can be accounted for by examining macroeconomic factors, this examination fails to predict which industries entrepreneurs will choose to enter. Clearly, new businesses that market highly valuable products and services are more desirable to foster than those which market low value products and services. To examine the factors that lead to high valued activities over low valued activities though, we must leave macroeconomics and return to one of the popular paradigms.

With respect to definition, many businesses operate in the “gray” market. The grey market lies between the illicit business activities, such as those practiced in the “black market, and those fully reported and fully legal, such as those practiced in the “white” market. Common examples of grey market activities would include baby sitters, maids, and contractors which perform services on a cash basis and do not fully report their earnings. Accurate statistics on the establishment of grey market businesses are naturally fraught with the challenge of getting the entrepreneur to report their less than fully legal activities. The “grey” market entrepreneurs and others who do not incorporate will not be represented in the recorded new business filings with the Secretary of State. This source of error will negatively bias the state level statistics.

With respect to the requirements for new business filings, individuals and businesses can file for the establishment of a new business in states that they do not live within. For instance, many individuals will seek to establish their business in the state of Delaware even though they live outside of that state due to favorable tort law within Delaware. This can leave the number of new business filings to be either positively or negatively biased as a metric for entrepreneurship. Further complicating the use of state recorded new business filings as a metric of entrepreneurship is the fact that businesses can file for the establishment of a new business. A business which is established by another business is not an entrepreneurial activity, rather it represents the expansion of an existing business. This source of error will positively bias the state level statistics.